We are shipping!  Fifty parcels are being shipped since last week
- you can expect your package to arrive soon!

A few fairytales are included in the Mysteries of Mary Tarot Deck.  Some of them were chosen as they relate to a specific archetype in both the tarot and the stories of Mary.

The fairy tale of the Handless Maiden was chosen because Mary
appears in an Eastern European folktale version of the story.
In some versions an angel or a being of light appears to help the
Handless Maiden, but in this particular folktale, Mary herself appears
to help the maiden.

The story of the Handless Maiden and her powerful symbology is told over
three cards in the deck.  The V of Holy Rood (traditionally Wands) is the first
one.  This card is titled The Miller's Daughter and we are introduced to
the young maiden, her father, the devil and very importantly, the apple tree.

The Miller's daughter is standing next to the apple tree with a loaf of bread
(food produced by the miller) on her shoulder.  She, as well as the significant apple
tree represents feminine values and attributes.    Feminine qualities and attributes
live in both male and female.  The story of speaks of the 'miller' and not the maiden's father.
This demonstrates that great importance is given to his occupation in the world,
rather than his role as father.
From the start we see the focus and emphasis on masculine goals and values.
In our culture the masculine values and attributes are greatly admired and promoted.
The emphasis on the miller, his greed for money, his disregard for both the apple tree
and his daughter, reflects and highlights the imbalance which exists and
the lack of reverence for the less visible feminine principles.

The apple blossom is a symbol of fertility and sensuality.
In Celtic lore the apple tree is the Tree of Love.

At the top of the shrine are two hands.  These will take
you to the next part of the story which is further developed
in VII of Holy Rood,, where the Handless Maiden enters the forest.

Traditionally this card means conflict and in this deck it refers to inner conflict.
The really important questions in life you have to find the answers to
yourself. Do not rely on the opinion of others.  Do not rely
on 'the done thing' or the accepted way of doing.
In other words, do not make a pact with the devil for your most
precious feminine feeling  and earthy nature.
Dig deep and feel the discomfort of the inner conflict
and may you find peace. 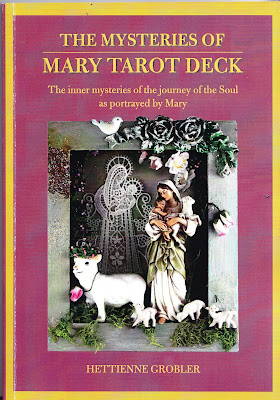 Posted by Hettienne Grobler at 9:45 AM