Card XVI The Changemaker, The Magdalen 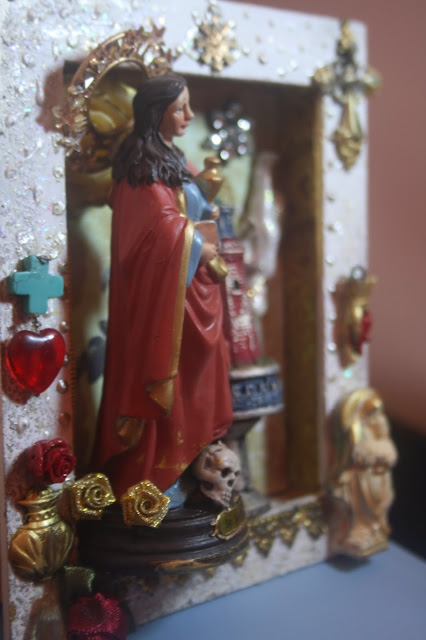 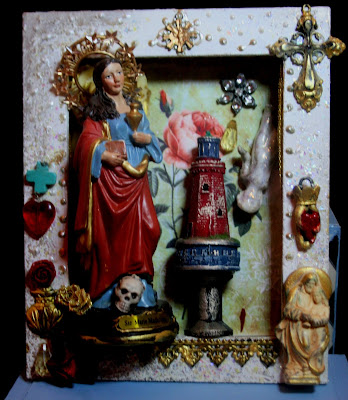 In the Mysteries of Mary tarot deck The Magdalen is the Tower
in the Major Arcana suit.
The tower is often seen as a bolt of lightning
coming down from the sky, and I suppose by inference,
from the 'God in Heaven'.

Here is Mary Magdalene, the woman from
Magdal-elder, the tower-stronghold,
Daughter of Sion seen as the embodiment of
the Immaculate Conception of Wisdom and the Changemaker.

She wears the halo of the Immaculate Conception and
the closed book of the Mystery in her hand.
At her feet is the skull, another symbol of Wisdom
and the ability to overcome the fear of death.
In the right hand corner she is depicted as the consort
of Jesus and her sacred oil and jar is displayed
as a reminder of her role as the woman who
anointed the King.

The iconography of Mary Magdalene is part of the Gnostic
tradition, amongst others.  The Gnostic religion has
virtually been stamped out by the dominant Roman
Catholic Church of the time, but the past sixty years or so, the
hidden wisdom has been coming to light once again.
These symbols of Mary the Magdalene speaks loudly and
clearly of her role in the history of humanity's psyche and
consciousness and our understanding of the role of
organised religion as opposed to the religion of the soul,
or the inner way.

The Mysteries of Mary tarot deck is based on the Path of Love,
the hidden inner way which is not always that obvious.
To connect with one's own inner way and to embody the
Immaculate Conception of Love within the self, many ivory towers
will have to come tumbling down within the personality
and its mindset and attitudes. 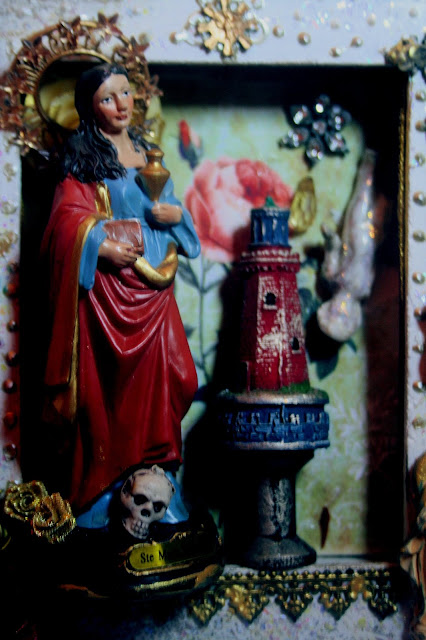 The tower represents the principle of "living in one's own tower"
This symbol is often used in fairytales, think of Rapunzel and her tower and
also in the story in the Bible of the Tower of Babel.
In both these cases, the tower separates one from the communion of
others;  it places you 'above' it all and it highlights the differences
between you and others.  It also implies
that you are not safe and obviously intensifies the
fear that you are not safe in this world.
What might have started out as a good idea,
soon becomes a problem.  The tower is a stronghold, a structure of
defense and protection.  You can see this in the personality.
One develops certain traits of your personality to protect you
from emotional and psychic harm, but at the same time you
separate yourself from others and from the experiences of the heart,
that is, you create an inner stronghold which keeps painful
experiences out.  This aspect of The Magdalen card can be seen
in the red heart that she holds in her hand on the right hand side
of the shrine.

This keeping out and defensive attitude is not limited to
personal relationships.  It will permeate all layers of your
being and mind and for those on a spiritual path, it will
affect the way that you relate to the idea of God and Goddess
and the sacred inner authority.

Your soul will allow this stronghold to exist as long as it is necessary
and then you will be given many opportunities to let go of those
attitudes and outlooks which uphold this ivory tower.
And when you do not heed the many opportunities, then
a bolt of lightning will bring your tower down and the
stubborn, fearful inner child will come tumbling down,
safely into the lap of Wisdom.

The path of Wisdom is not always pleasant and comfy, but
she does promise change and rebirth into a new consciousness
and new enlivening circumstances.

In the same way The Magdalen is bringing change in our own
religious structures and she is bringing enlivening in the way that
the old mythical gods are seen and understood.  She also highlights
the equality of both the masculine and feminine, both within the psyche
and within the world of knowledge and structure.

When you draw this card in a reading, you can be certain that
change is finding its way to you.  And not gradual slow change,
but an unexpected disruption of the state of affairs;  a shock to
the system and an overthrow of the current status quo.

Our Lady Mary Magdalene is overseeing this change in your life
and you will not be lost, but a new you will be found.

In celebration of the Feast Day of Mary Magdalene 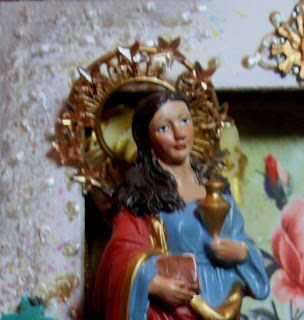 Posted by Hettienne Grobler at 1:26 AM