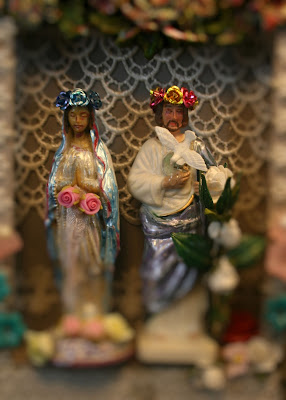 The Wedding of Mary and Joseph
Four of the Holy Rood
(traditionally Four of Wands in the Tarot)
Sacred Mysteries of Mary tarot deck
www.hergracesacredart.com

The story  of Mary and Joseph's wedding and the miraculous
flowering of the rod that he carried,
is found in the Protoevangelium (New Testament apocrypha)
and thence in the 13th century Golden Legend,
which was an important source-book for artists.


It tells how Joseph was chosen from among a number of suitors by a sign,
the miraculous flowering of his rod. The miracle was witnessed by the
seven virgins who were Mary's companions during her upbringing in the Temple.

Joseph's attributes as a saint and as Mary's husband
are a Lily (for chastity); various carpenter's tools, and a flowering rod or wand. 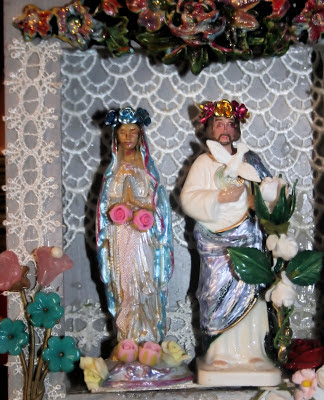 The story of the miraculous flowering of Joseph's rod is as follows:

According to St Jerome the suitors of Mary each brought a
rod to the high priest of the Temple.
Joseph's rod blossomed, a sign from heaven
that he was chosen to be her husband.
The apocryphal Book of James relates that a
DOVE came forth from the rod and settled on Joseph's head.
He is usually depicted with a flowering rod,
sometimes with a dove on it.
The theme was condemned by the Council of Trent
in the mid-16th century
though thereafter Joseph retains the rod as an attribute.
It was seen as a symbol of the Virgin's state because
it flowered without being fertilized.
The story closely resembles the Old Testament account,
of the flowering of Aaron's rod.

-  extracted from the Sacred Mysteries of Mary Tarot Deck 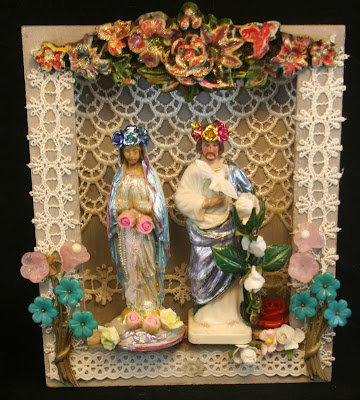 It is said that the rod was a branch of the Hawthorn tree,
sacred to many goddesses in the ancient world and today
sacred to Mary.  And did you know that the hawthorn
rod that Joseph of Arimathea planted on WearyAll Hill
in Glastonbury flowered every year during winter
and that a branch was sent to the Queen every Christmas?
Vandals cut the tree down a year ago and many people
mourned its loss and its symbol of hope and illumination.

There is also a hawthorn tree standing at Glastonbury Abbey
near the well of Mary and legend tells us that she was
taken to the safety of Glastonbury by Joseph of Arimathea.
This tree also inexplicably flowers in winter.

Can you imagine the sight of a white blossoming hawthorn
in the midst of the snow of Avalon?
(the mystical name of Glastonbury)

If you would like to hear more about the hawthorn and its
significance as the holy rood in the Mysteries of Mary
I write about it here :
http://www.hergracesacredart.com/2015/10/some-of-themes-of-sacred-mysteries-of.html

Email ThisBlogThis!Share to TwitterShare to FacebookShare to Pinterest
Labels: Catholic mysticism, Four of the Holy Rood, Wedding of Mary and Joseph