The Miracle of the Sun

The Miracle of the Sun. This is how it is known to the people of Portugal.
It all happened just 93 years ago, starting in May, 1917.
Three shepherd children spoke of experiencing a vision of the
Virgin Mary in the Cova da Iria fields close to the town of Fatima.
It was the 13th day of the month.
They were to repeat the experience on the 13th day of each month till October.
The eldest child was Lucia, aged ten, and she was accompanied
by her two cousins, Francisco, aged nine and Jacinta, aged seven.

When questioned, the children described seeing a flash of lightning about noon.
It was followed by another which enveloped them in a blinding light.
Looking up, they saw a lady “brighter than the sun”,
her bare feet resting on a cloud touching the branches of a stunted holm oak.
They described the vision as lovelier than any person they had ever seen.
The “lady” was young, dressed in white, her face pure and smiling, 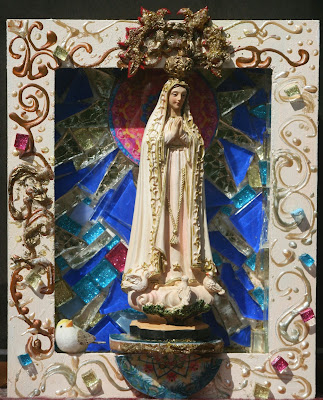 On October 13th a crowd of 70,000 gathered at the
Cova da Iria in response to the children’s claim
that a miracle would occur on that day “so that all may believe.”
At the appointed time, in the middle of a rainstorm the clouds broke up
and the sun was seen as a disk spinning in the sky,
throwing off great rays of fantastic colours.
As one columnist reported, “Before the astonished eyes of the crowd
the sun trembled and danced.” Suddenly it seemed to fall
until it almost reached the earth, but then it stopped,
slowly making its way back into the sky.
Before Christianity the Sun was the female deity in many cultures
and the moon was the male God.  The mythologist
Janet McCrickard asserts that sun goddesses are more common
worldwide that male sun gods.  She suggests that the belief
in the male solar deities spread due to a few popular
Greek and Roman mythologies.  There are opinions that
the rising patriarchy in some cultures downgraded the power
of the female realm assigning it to the Moon of lesser light
claiming the power and brightness of the Sun for themselves.

The stories and descriptions about Mary become meaningful
to a woman when she understands the mysteries of Mary
in the light of her own feelings, her personal experiences,
imagination, dreams, creativity and all the aspects of her own
personal life.  A personal relationship with a female
divine image and being allows a woman to connect
with her own deepest inner and divine self.

When one relates to Mary through your own personal
experience, the story becomes different for every woman
but a personal guide and Muse for life direction and
self-fulfillment and happiness.