Anna, Keeper of the Hearth 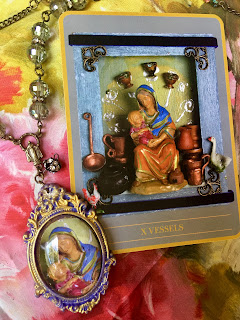 Saint Anne Keeper of the Hearth - Ten of Vessels (cups) in the Mysteries of Mary tarot deck as an amulet rosary.

The image is set under a glass bubble in a resin frame with crystal beads - all in violet hues.  It comes with the tarot card in the pouch as shown.

This image is of the tarot card Ten of Vessels(Cups) in the Mysteries of Mary tarot deck.  In this suit the story of Mary in the archetype of Virgin-Mother, Prophet and Priestess of the Mysteries is depicted. 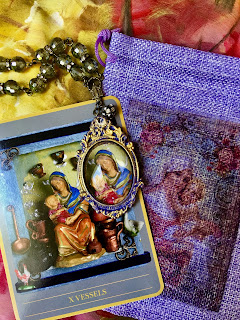 X Vessels - Anna, Keeper of the Hearth
Anna sits with Mary on her lap in the same way that Mary sits with Jesus on her lap. Here we have the feminine version of the Mother and Holy Child: Holy Mother and Holy Daughter. They are surrounded by the pots, pans and utensils of the kitchen.  The kitchen is the hearth of the home and the oven specifically is an alchemical container.  The process of baking and cooking is an example of an alchemical process in ordinary domestic life. Turning wheat into flour, then into dough and ultimately baking it into bread, is symbolic and representative of the powerful processes of transformation in our lives.   Making bread in different shapes as a sacramental ritual and offering to the goddess is an ancient tradition which is still prevalent today.   An oven has also been a metaphor for a woman’s womb and bread making as a metaphor for gestating and giving birth to a new life.  For instance, the saying in popular vernacular: ‘she has another bun in the oven’.  In ancient houses the hearth or kitchen was the communal living area and the central and biggest room in the house and the oven used to be a separate structure outside. 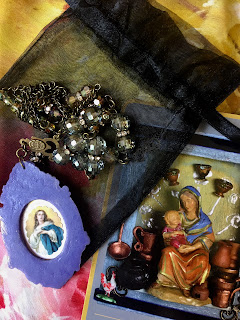 In these old civilisations the process of harvesting from the land and then turning the grain into a complete food, was honoured and revered.  In our modern society much of the preparation of food has been industrialised and domestic activities, once sacred to the Goddess, are no longer valued.
This shrine and card indicates a happy time at the end of a long journey.  It speaks of idyllic happiness and moments to be treasured and honoured.  You are reminded to honour and value the feminine qualities of nurturing, empathy and creating supportive surroundings for yourself and others.  It also speaks of alchemical transformation and positive outcomes.  As a spiritual initiate and student of the mysteries, you will be basking in the blissful glow of fulfilment of being.

The Suit of Vessels in the Mysteries of Mary tarot deck

Mary in the archetype of Virgin-Mother, Prophet and Priestess of the Mysteries
In the suit of Vessels we encounter Mary as the element of water.  Mary is a derivative from the Latin Maria which means waters.  In French ‘mare’ is the word for water.  Water has the power to drown us or to quench our thirst. We know Mary as the loving nurturing mother and also as the Mater Dolorosa, the grieving mourning mother, dressed in black, mourning the loss of her son. In Lourdes you will see hundreds of pilgrims carrying large containers of water from the sacred spring home every day and many fill small bottles from the waters of the healing spring.  Mary is called a Vessel of Spirit, a Vessel of Honour and in Lourdes she is the Vessel of the Sacred Waters. In the Mysteries vessels refer to the human being and its divine soul being a vessel for the will and love of the divine.

She represents the oceans of consciousness as well as the energetic flow of the soul and her powerful emotions.   Vessels also relate to the metaphor of the Cosmic womb of the soul and the dark void of the Source of all creation. We see the element of water represented in mystery of Mary’s blue robes.  In Homer’s Odyssey, the sea is referred to as being ‘wine-dark’ (obviously a reddish colour) and not blue.  Research has been done which shows that the colour blue was only referred to and used in dyes by the early Egyptians.  Scientists have also argued that the human eye could not see blue in the spectrum of light up till that time.  In the glass windows of Chartres a certain blue is used for the Virgin’s blue cloak.  This colour is called ‘chartres blue’ and modern stained glass manufacturers have not been able to recreate this colour.

In this suit we enter the alchemical process of the miraculous conception within ourselves and we prepare to birth the Sacred One in our own psyche.
In alchemy the vessel is the container in which the various ingredients are mixed and transformed by each other. It was believed that the alchemists were looking for a way to turn lead into gold, but it is also believed that it is actually a metaphorical journey of transforming darkness into light and one of finding joy and peace amidst sorrow and hardship as we live in a world of holy paradox.  Mary is the vessel for Divine Love incarnated as her Son in the physical world and within our souls.  She is also the spiritual vessel in which opposites combine.  As we are tested and challenged, like Bernadette, we have the choice to obey the instructions of the voice of the Lady that no-one else sees or to listen to the incredulous villagers and Cure.  As we follow the calling of our heart, we are led to dig where no-one else thought to look and we will uncover a spring that will feed and nourish thousands.