We entered  the year 2017 in our calendar system.
The past year, 2016, in numerology was a 9 and on both a personal
and collective level, we experienced many endings and losses.
Nine as a number represents loss, endings, sacrifice and surrender.
It is the last number of a cycle before the new cycle starts
with 1 again. 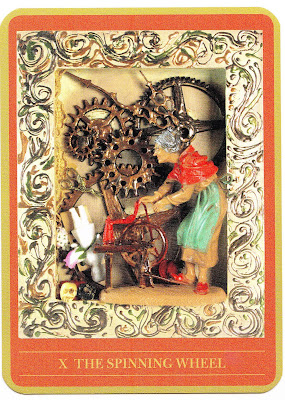 In the Mysteries of Mary deck the 10 in the Major Arcana
is The Spinning Wheel.  This links with the idea that life is an ever-turning
wheel and in particular to the theme of spinning and weaving as
told in the Suit of the Distaff.  The old woman is spinning the red
thread of life and this reminds us of the ancient stories of the Three Fates
and the Spinners of the Thread of Life.

The number 0 is the Holy Mara, the bitter one and the first
card of the major arcana.  She is the one who sets out on a journey
of discovery and revelation and ultimately discovers her true
self in the final card of the Major Arcana, Heaven on Earth.

*We have entered the period of Capricorn a few days ago
on the Winter Solstice and the card Heaven on Earth, is the
card of Capricorn.  The ruler of Capricorn is the planet Saturn which
is represented by the card XV The Black Madonna.  I will discuss
these two in the next post.

Mara sets off with her Innocence and Soul Identity in tact.
She carries the Lamb, symbol of the Innocence of the Soul
and is accompanied by the rabbit, sacred to the Great Mother.  In the
background we see the Inner Child, the one who carries the
Soul Identity for this lifetime, following her footsteps.

The next very important card for this cycle is the 1 in the Major Arcana, Maria Prophetissa.
She is the first female alchemist in history and she initiates Mara
into her role as Alchemist and Magi.  The 1 represents individuality,
independence, walking by oneself , new beginnings and initiation.
We are being initiated into a new cycle, a year 1.
Maria Prophetissa is the messenger of alchemy and transformation.
This promises a year of new beginning and also of change.
In order to enter into a new cycle, one has to truly let go of the
past.  As we begin something new, we have to create space for the
new.  It also means that we have to gather our courage and inner
strength to embrace the change and the unknown.  None of these
come naturally or easily to the personal self.
So even if you are happy to see the back of 2017, be prepared
for some rocky days, but ultimately the river of life will carry you into
a new horizon and vistas.

To further understand the impact and meaning of the 1, you can
also look at the Ace cards in each suit.  Also pertinent will be the ten of each suit.
In order to get a full picture of the impact of the new year on your
life and context, you can work with the cards discussed above
as well as the Ace and Ten of each suit.  Each suit represents one of the four
elements of the mental, emotional, physical and spiritual aspects of your being.

Posted by Hettienne Grobler at 11:18 AM