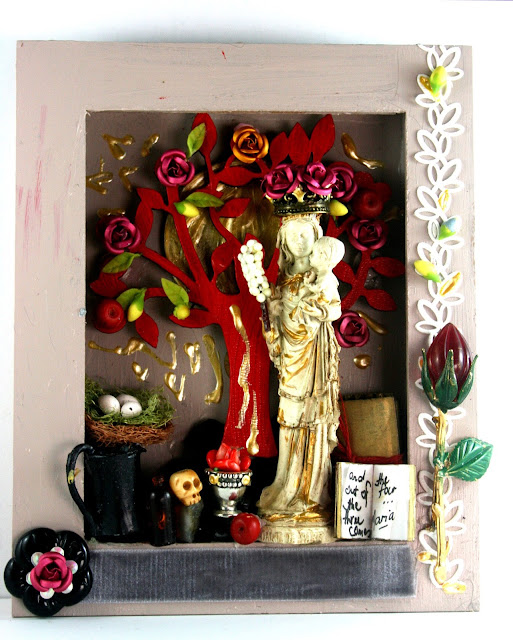 "One becomes two, two becomes three, and out of the third comes the one as the fourth."

The early or even some say, the true first alchemist of the Western world,  was known as Mary or Maria the Jewess, Mary or Miriam the Prophetess and Maria Prophetissa.  She is known as a Jewish alchemist, but is also referred to by other writers and cultures.  She is also known by these names :  Maria Hebraea, Maria Prophetissima and Mariya the Sage; She is known from the works of the Gnostic Christian writer Zosimos of Panopolis who dates her as having lived in the third century.  But others claim that her work was done no later than the first century. Zosimos describes her as one of the sages.

In alchemy the Axion of Maria exists :  "One becomes two, two becomes three, and out of the third comes the one as the fourth."

Many precepts of hermetic alchemy have been attributed to Mary.  None of her writings remain except for The Dialogue between Mary and Aros on the magistry of Hermes.   In this document many basic and fundamental alchemical processes are described.  Certain cryptic quotations of alchemy have been attributed to Mary, the Jewess and Prophetissa and she is said to have spoken of the hieros gamos or the union of opposites.  A quote attributed to her is ‘join the male and the female, and you will find what is sought’.

Mary Prophetissa is said to have invented the tribikos,  a three-armed distillation instrument; the kerotakis, which is a hermetically sealed container and the bain-marie.  The bain-marie (Mary’s bath)  is a double boiler that is used in chemical processes.  The bain-marie is also used for cooking food which is an example of alchemy in the day to day life. 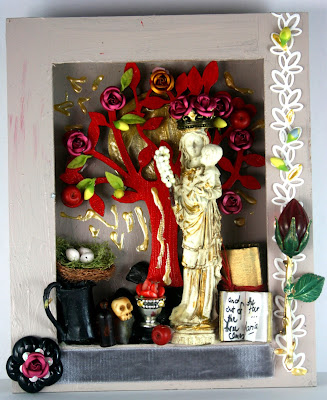 Card I is traditionally the Magician in the deck.  It represents Hermes, the psychopomp (the inner guide of the psyche) or the Alchemist.  In this deck Maria Prophetissa is the embodiment of the archetype of Alchemist.  She is the one who initiates us into the adventure called life and its accompanying challenges.  She is the one who introduces us into the melting pot of experiences.

In this card we see the three colours of the cycle of life, red, black and white.  Maria stands in front of a red tree of life blazing in the light of the sun rising in the background.  The birds nest represent new life and the skull represents death.  The alchemical processes involve death and rebirth.  All change and transformation feels like death to the self.  At her feet are the four elements of the four suits, namely the chalice from the suit of vessels, a red apple from the suit of the holy rood,  the red thread from the suit of the distaff is tied around the book and the red rose.

In the open book is written the Maria axiom :  "One becomes two, two becomes three, and out of the third comes the one as the fourth."

The alchemist seeks to ‘make gold from lead, the prima materia’.  The process starts from the black stage also known as nigredo through various stages to gold.  The blazing red tree is firmly planted in the black stone said to be buried at the foot of the tree of life.  The red tree has become one with the black stone through its root system.  In the alchemical process of spiritual transformation, it is understood that one has to bond with the opposite or the nemesis.  You have to surrender to and accept the given circumstances and the parts of the personal self which you might find abhorrent and as the cause of your failed attempts at finding joy and peace.  And indeed, you have to grow to love, integrate and merge with that part of yourself before transformation can take place.  Then, and only then can conception and birth take place.

The black stone represents the black stage (nigredo) and the physical matter and personal ego.  The personal ego would seem to be the black sheep in the story.  One’s personal limitations and shortcomings would appear to be the nemesis in the journey of joining soul and spirit.

In Alchemy the Philosopher’s Stone is required to make the process happen.  Is this the same stone as the stone hidden at the foot of the tree?  If it is, it means that the physical life and its suffering is the Philosopher’s Stone to the manifestation of the gold, the goal of the alchemical process.  In other words, there is no other way except for the way through the dark tunnel of despair of feelings of being overwhelmed.

The red tree of life is symbolic of the fiery kundalini that rises like the living sap through the trunk of the tree and its branches, enlightening the human energetic system with higher spiritual values and understanding.  And in the background we see the blazing golden Sun of Gnosis and illumination.

Maria Prophetissa, the Alchemist, tells us that that everything is as it should be.  You are exactly where you need to be and that there is no hidden enemy other than ignorance and unconscious living.  When you bask in the golden Sun of illumination and you allow all of yourself to come out of the hidden shadows of shame, guilt and depression, then transformation will take place.  Obviously, that is not such an easy undertaking as you will have to die to the old.

Posted by Hettienne Grobler at 6:15 AM