A great sign appeared in heaven: a woman clothed with the sun,
with the moon under her feet and a crown of twelve stars on her head -
Revelation 12:1 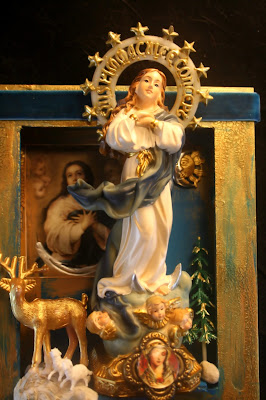 In the World card the archetypal journey of the Holy Fool
reaches its culmination.  Here we have the sanctification
of the ordinary world :  the sacred marriage between
spirit and flesh; nature and soul;  the ordinary and the sacred.

In the Oneness card of the Mysteries of Mary
we see the Virgin Mary, the immaculate
conception, as both the perfect, immaculate
idea of the world as well as the
incarnate embodiment of the very human mother.

She is the Queen of Heaven and Angels
as well as the Mother of all Living Beings
and nature itself.
We have Mary, the woman,
the stag, the lamb and the wings of angels
representing the four suits and the four paths.
The Virgin and the Stag are ancient symbols
of the World and the Christ.  Here the Virgin,
the Immaculate Conception, is symbolic
of the world as an idea, immaculate from all sin,
born from inspiration and a perfect idea, and the Stag
is symbolic of the incarnate Christ,
the sacrifice and redemption of the sin of
the physical and natural world.

The horns of the stag are like the branches
of the tree, the ladder of the world,
ascending through the various stages
of life, from the physical to the spiritual.

Beyond our physical and psychic being, we have
to discover our spiritual being, our eternal ground,
and there the mystery of love is fulfilled.
Some may come to this interior marriage by
way of exterior marriage, others are called
by the way of virginity, but all alike have to experience
the virgin birth, the marriage with God,
before they can reach maturity - Father Bede Griffiths 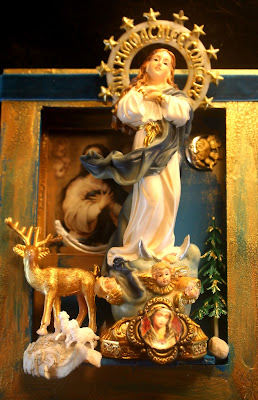