The symbol of the flowering cross, the Holy Rood


The flowering crucifix is a symbol of Divine Love,
absolute forgiveness and rebirth.

It is also a promise of regeneration and a new vision.

It symbolises the Life Force also known as the kundalini
or the Sacred Living Fire, which gives life to
all that is alive.

An object of torture and death becomes a symbol
and an embodiment of the greatest power : Love.
Each human being has the power and the ability
to know Love and to become Love and the act of
forgiveness truly speaks of Love. 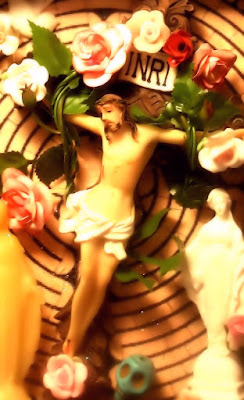 The crucifix theme is a continuation
of the theme of the sacred tree or tree trunk as
seen in the myth of Isis and Osiris where a tree
grows around the chest containing Osiris' corpse.
Isis through various tasks resurrects Osiris from the tree.

Death is a journey through the Underworld
in order to be born again.
In contemplating the hidden or esoteric meaning
of the metaphor of spiritual and religious stories
we enter the realm of sacred psychology.
The marriage of the personal life and the
inner divine life, give birth to the divine
child of Love within.
This marriage initiates one into an amplified
life, one that is more cherished and more cherishing.
It requires that we undertake the task of
dying to our habitual, reactive, personal selves
and being reborn to our eternal selves.

The flowering crucifix and flowering rod is a symbol of eternal life.
It is a reminder that we, as Spirit, live eternally and that
death is merely a transition and not the end.
Love is eternal and by embodying Love
we become One with the eternal.

The crucifix is the ultimate symbol of the Holy Rood,
the Holy Wand or Holy Rod.

Then again at Mary and Joseph's wedding and
later with the flowering of the hawthorn rod planted
by Joseph of Arimathea in Glastonbury.

The story  of Mary and Joseph's wedding and the miraculous
flowering of the rod that he carried,
is found in the Protoevangelium (New Testament apocrypha)
and thence in the 13th century Golden Legend,
which was an important source-book for artists.

It tells how Joseph was chosen from among a number of suitors by a sign,
the miraculous flowering of his rod. The miracle was witnessed by the
seven virgins who were Mary's companions during her upbringing in the Temple.

Joseph, the husband of Mary's attributes as a saint
are a Lily (for chastity); various carpenter's tools, and a flowering rod or wand. 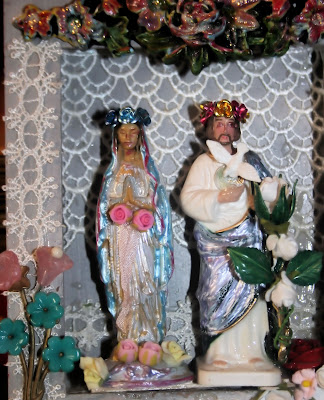 The story of the flowering of Joseph's rod :
According to St Jerome the suitors of Mary each brought a
rod to the high priest of the Temple.
Joseph's rod blossomed, a sign from heaven
he was chosen to be her husband.
The apocryphal Book of James relates that a
DOVE came forth from the rod and settled on Joseph's head.
He is usually depicted with a flowering rod,
sometimes with a dove on it.
The theme was condemned by the Council of Trent
in the mid-16th century
though thereafter Joseph retains the rod as an attribute.
It was seen as a symbol of the Virgin's state because
it flowered without being fertilized.
The story was a borrowing from the Old Testament account,
which it closely resembles, of the flowering of Aaron's rod.

-  extracts from the Sacred Mysteries of Mary Tarot Deck

Posted by Hettienne Grobler at 3:14 AM