Tarot Deck of the Mysteries of Mary - I The Magician

I The Magician - Sacred Heart of Jesus

My yoke is easy and my burden is light -
Matthew xi, 30

The Magician is the first card of the Major Arcana,
after the Zero which can either come before the
I or after the last card.

Many tarot readers and interpreters of these
mysterious cards, link the 22 major arcana
cards to the letters in the Kaballah - mainly
because the two numbers correspond.
In the Tarot decks that do use this correspondence,
this card is Aleph and thus invokes the
Biblical statement I Am the Alpha and the Omega.

In the Rider-White tarot deck
the Magician has the leminiscate above his head
and his tools on the table in front of him.
Here Jesus has the leminiscate in his
wondrous halo, adorned with roses.
Roses symbolise divine love and perfection.
The five petalled rose symbolise the perfect
human being, or the Self or Divine Soul.
The Rose is also the symbol of the flowering gift
which the self receives upon a sacrifice.
Through the cross to the Rose.

The Sacred Heart is the fifth mystical wound of
the Christ.  I will explain more on this later in the deck.

The Magician is the first arcanum and therefore a very
important one.  If one does not understand nor grasp
this arcanum, you will not know what to do with
the rest that follows.

Here the Magician has the rose, the chalice,
the sword and the holy medal, representing
the traditional pentacle.  These four represent
the four suits of the elements, water, air,
fire and earth.
These four elements are also present in ourselves
in the physical, and as importantly, in the
emotional, mental and spiritual aspects of ourselves.

The miniature scapular of the Carmelites adorn
the one side of this altar card.  This symbolises
that it is necessary to don the garb of the Magician,
to embody the principles and practises of
The Magician, the magi, in order to become
that which you seek.

The Magician represent the archetype of the
Visionary :  the one who through one-pointed focus
can manifest ideals and dreams into the physical
world and make it a reality.
A necessity for a Visionary and for real success
in the material and spiritual world, is the ability
to focus and concentrate the mind.
Both St John of the Cross and St Teresa of Avila
emphasises the need for concentration
for spiritual prayer.  They state that the
power of concentration comes as a result of
moral purification.  The silenced will, the one that
has been brought into alignment with the Higher Will.
can silence the mind's thoughts and desires
in one-pointed concentration.

Here the vision of the Magician is firmly centred
on the Sacred Heart as the cave of
love of the Christ.
The anatomical drawings of the physical heart
in the background, focuses our vision and
understanding on the fact that the human
heart is the seat of Vision as well as the Christ within.
When you see with the Heart instead of with the
physical eyes, you are privy to the world
of the artist and creator.

The Divine Creator creates with unconditional
love and compassion and it is the journey of the
self to clear the mind and overcome its
conditioning of negative beliefs and fears
until it can see in the mirror clearly.

The Magician is the one that can see into
the unconscious mysteries and bring these back
for others to become aware of. 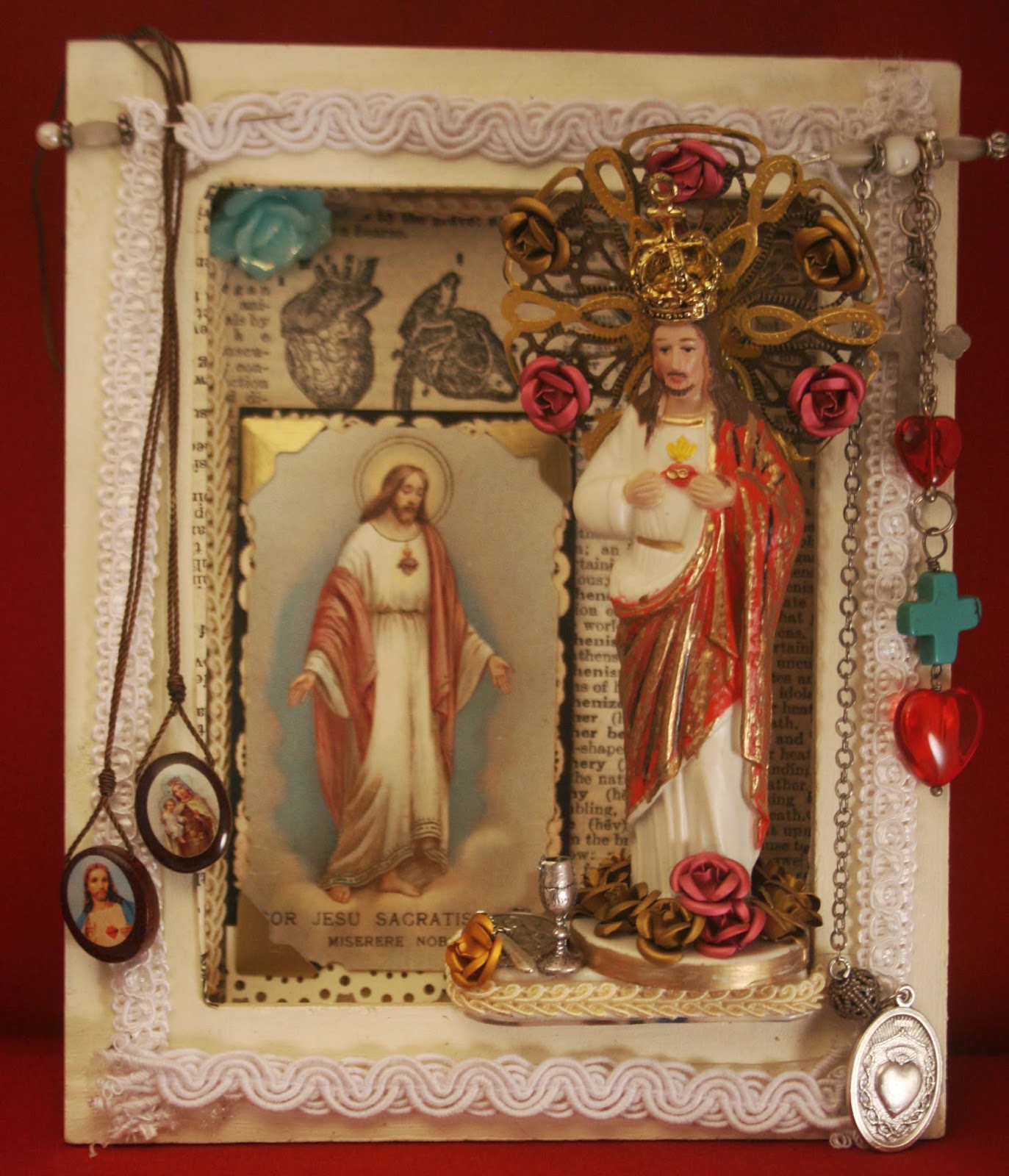 In the same way, in the story of Jesus, we are told
that He was a magician.  He transformed the consciousness
of mankind and he worked miracles.
The Christ is present in every human being.  The Christ
is the greatest Love principle and has the power to
work miracles and to liberate minds!

Email ThisBlogThis!Share to TwitterShare to FacebookShare to Pinterest
Labels: Tarot Major Arcana; I The Magician; Sacred Heart of Jesus, Tarot of the Mysteries of Mary